In Fernando Pessoa’s quasi-autobiographical The Book of Disquiet (1998), the insomniac bookkeeper, Bernardo Soares writes a diary entry about his journey across Lisbon in the early 1930s:

I’m in a trolley, and, as is my habit, I’m slowly taking notice of the people sitting around me. For me details are things, words, sentences. I take apart the dress worn by the girl in front of me: I turn it into the fabric that makes it up, the work that went into making it… And immediately, as in a primer on political economy, the factories and the labor unfold before me – the factory where the cloth was made…I see the components of the factories, the machines, the workers, the seamstresses, my eyes turned inward penetrate into the offices, I see the managers trying to be calm, I follow, in the books, the accounts involved in it all; but it isn’t only that: I see, beyond that, the domestic lives of those who live their social lives in those factories and those offices…All of them pass before my eyes merely because I have before me, below a dark neck, which on its other side has I don’t know what sort of face, a common, irregular green edge on a light green dress.

The entire life of society lies before my eyes.

Beyond all that I sense the loves, the secret life, the souls of all those who worked so that this woman seated in front of me in the trolley can wear around her neck the sinuous banality of a band of dark green silk on less dark green cloth.

I become stupefied. The seats on the trolley, made of a tightly woven strong straw, carry me to distant regions and into multiple industries, workers, workers’ houses, lives, realities, all.

I leave the trolley exhausted and sleepwalking. I just lived an entire life.

In a rare close-up, Natasha Raheja’s short film, Cast in India, opens with the camera zooming in on a zebra-crossing at a busy 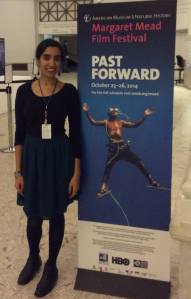 intersection in New York City. Amidst the crowd of legs, we catch a glimpse of a Macy’s shopping bag for the fraction of a second; the red star, though rarely visible, makes the scene almost an extension of Soares’ reverie on seeing the green dress of the girl sitting in front of him. For a moment, I wonder if, like Soares’ diary entry, Natasha wants us to think what the bag contains, where these commodities come from, who produce these commodities, and how they arrive in this city. Unlike 1930s Lisbon, the labor infrastructure that produces clothes and other commodities for western consumers has expanded. Once we look up the tag on a shirt, a top, or a pair of jeans, we are certain to encounter ‘Made in Bangladesh’, ‘Made in Nigeria’ or ‘Made in Vietnam’ embossed on them. A growing awareness about exploitative labor conditions across garment factories in third-world countries reveals to us the social life hidden behind these objects. Something that Soares’ diary entry tried to imagine.

When the same sets of people at the zebra-crossing step on a grey manhole cover, where ‘Made in India’ is prominently emblazoned, no one seems to notice. They step on it or step across it. And that’s that. So do we, who live in this city. However, Natasha’s deft camera cuts to the grimy and soot-filled interiors of a factory in Howrah in the Indian state of West Bengal, in her quest to track down the labor networks that lie hidden behind these everyday objects.

Cast in India makes a crucial intervention in the discourse of labor and globalization – Soares couldn’t have conceived of this in 1930s Lisbon – as labor-intensive work gets outsourced to the poorer countries. The camera pans around the vast expanse of the foundry and then zooms in on the details of each of the fragments that constitute the production of these sanitary castings. The working conditions are primitive, where molten iron is carried in tin containers and the workers use their bare feet to shove parts of the castings. There is a striking rawness in this portrayal that affects the audience viscerally as the camera focuses on the bare bodies and spindly sinews of workers who are seen milling around to have a cup of tea or change their dress before exiting the factory. Like Bernardo Soares imagining the people who produced the green dress in factories, I am left exhausted at the end of the screening.

Natasha’s film works on two different registers: first, it reveals to us the extensive labor infrastructure and social life behind the everyday objects that we encounter in the built environment of the city, thereby highlighting our own alienation in modern life; second, it exposes the hazardous working conditions that are masked by the shiny surfaces of our great metropolises.

Here is a courageous and talented filmmaker, who makes an unusual move of entering the grubby interiors of a factory; something not many young filmmakers do these days. The film has been nominated for the 30th Annual IDA Documentary Awards.

Catch the next screening of Natasha’s film. Details here.

Trailer of Cast in India

Here is a brief conversation with Natasha, who is pursuing a doctorate in sociocultural anthropology at New York University:

Mosarrap H. Khan (MHK): Congratulations on an excellent film! Please tell us something about your background as a filmmaker. Was Cast in India your first film?

Natasha Raheja (NR): I started learning filmmaking at New York University. I am in NYU’s Culture and Media program which offers integrated training in anthropology and video production. Cast in India is my second film. It’s my first on the film festival circuit.

MHK: What prompted you to make a film on ‘manhole covers’ in New York City?

NR: I was walking the city streets one day shortly after moving here from Texas, when my gaze fell to a manhole cover below my feet with the boldly emblazoned byline ‘Made in India’. Iconic and ubiquitous as manhole covers are in New York City, I wanted to learn more about this curious circuit of exchange.

NR: Viewers have a range of responses to the film and take different things away with them. For me the film enlivens everyday objects and commodities, while raising questions around the concealment of labor infrastructure.

MHK: To your credit, without recourse to typical documentary techniques of voiceover, interviews, interpretations etc., the film succinctly captures the process of production of ‘manhole covers’ in factories in Howrah. Could you please tell us more about this particular style of filmmaking where the camera itself, as if, does the talking?

NR: I employ a sensory ethnography style that foregrounds feeling over interpretation and presence over explanation. I strive to make patient and committed shots. I strive to maintain a proximity to my subjects that is palpably intimate, and thus, for example, I minimally use the zoom feature on my camera.

MHK: What was the experience like in Howrah? Did you face any obstacles while shooting for the film?

NR: Shooting on location in Howrah was very smooth and I faced no significant obstacles. Except for being cloaked in soot!

MHK: At the end of the film, you insert a clip where some of the workers watch the film on your laptop. What was the idea behind it? Could this help the workers themselves overcome their alienation from the fragmentary nature of work in the factory?

NR: I wanted to share my representation with the foundry workers. Many of the workers’ family members had not seen the foundry before and were curious about the technical process of iron casting.

MHK: What other future projects are you thinking of at the moment?

NR: I want to share the film with a range of audiences so I am diligently applying to film festivals. I also hope for the film to have an educational circulation for which I’m exploring ways to build a lesson plan around the film for high schools and colleges.

Mosarrap H. Khan is a doctoral candidate in the Dept. of English, New York University. He researches in the area of Muslim everyday life in South Asia. He is an editor of Cafe Dissensus.

[Author’s Note: I first came across the quotation from The Book of Disquiet in a journal article by Gregory J. Seigworth & Michael E. Gardiner.]